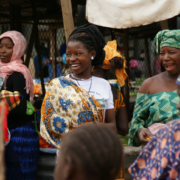 The medical definition of cataracts is the clouding of the lens of the eyes.  The eyes provide sight and visual detail. When the eye is infected with cataracts, the sight becomes blurry and lacks the ability to see clearly. Although cataracts is traditionally used in medicine, cataracts can be applied to a cultural lens.  Cultural cataracts is the inability to see situations clearly. One’s vision is obstructed and cannot focus.  You can see only vague images and must rely on a limited narrative to make decisions.

While growing up in Montclair, New Jersey, the perception of my life was shaped by cultural cataracts.  My zip code created a false narrative based on the townships’ dominant white culture.  My reality, I was a Haitian American, financially disadvantaged, and living in an affluent township.  My zip code gave me access to events, activities, and an education.  However, my personal narrative was different from the lens from which I was viewed.  My family struggled financially, my white friends did not fully understand or accept me, and I struggled to fit into a cultural paradigm that did not understand me, my Haitian culture or my needs as a developing Black young man.

I first learned of the term cultural cataracts from Alhassan Susso.  A native of the Gambia, Mr. Susso, was the 2019 New York State Teacher of the Year, 2019 New York State History Teacher of the Year and the 2020 Horace Mann Educator of the Year. He was also named in 2017 as one of “The Top 50 Outstanding Educators in the World” by the Varkey Foundation’s Global Teacher Prize. Most importantly, he is also a GOMO Educational Services consultant.

Mr. Susso recounts, “Of all that I have discovered during my journey from a small town in Africa’s smallest country, The Gambia,  to such a large nation with so many diverse cultures, I have learned that we often develop cultural cataracts, a condition in which the social lenses though which we see become increasingly opaque and blurry. This is not a condemnation, rather a simple recognition of reality.

Although I was born in the United States, my young adult and adult experiences with cultural cataracts were very similar to Mr. Susso of seeing and being on both sides of this phenomenon. While this condition causes detriment to groups of diverse backgrounds and cultures, it is rarely, if ever diagnosed or treated by professionals. As a result, the voices of the dominant group which shapes the cultural norms continues to address their group’s needs with little to no regard for all other groups. More importantly, people in the dominated group strive so hard to be accepted by the dominant group or culture. Although we see the negative effects of cultural cataracts in our society, especially during our current pandemic, we must realize that it is not a condition that can be solved with a quick remedy. We will explore the impacts of cultural cataracts in the classroom during part two of this blog post.

Cultural Cataracts in the Classroom, Part 2
Scroll to top