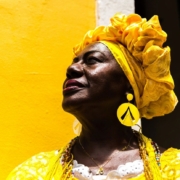 In my first blog post, I explored the term cultural cataracts.  This is the condition in which one’s vision is blurred due to an inability to see situations clearly.  Cultural cataracts not only applies to my personal narrative but applies to the narrative of equity in education.  Education is often touted as the great equalizer.  However, when many schools are underfunded, under resourced and filled with administrators and teachers who only view students through a blurred lens, education is no longer an equalizer.  Education points out inequities and creates tension in our classrooms and schools based on a singular blurred view.

In the first post, Mr. Alhassan Susso also provided his understanding of cultural cataracts. Now, he recalls his first encounter with cultural cataracts in the United States two weeks after his arrival. He ran out of clean “American clothes,” so he wore his African clothes to school. He was complimented by the teachers in every class he attended that morning. When he walked into his history class in the afternoon, the teacher seemed to leer at him.  After a few moments, the leer became a glare and the history teacher blurted out, “If people want to wear their funny dresses, they should stay in their country. This is America!” Mr. Susso was shocked and so, it appeared, were my fellow classmates.

A few months after that uncomfortable encounter, his history teacher took the time to get to know him. They eventually developed a strong relationship based on understanding each other’s backgrounds and values.  Mr. Susso reminisced about how many times a week he would visit his history teacher during lunch and ask for help since he literally knew nothing about U.S. history. His history teacher began to understand his story and who he was as a person rather than through stereotypes and assumptions.  As his history teacher began to internalize Mr. Susso’s story, he became interested in the connection between American history and immigration. For this U.S. history class final project, students had to interview an immigrant and write about their experience in America. By the end of the project, these stories were read out loud, the class decided to compile them in a book to share with the rest of our community. The publication of Poughkeepsie Pride: The Stories of our Immigrants became one of the most exciting and memorable experiences of Mr. Susso’s high school days.

Mr. Susso further stated, “I understand the importance of addressing my own cultural cataracts.  As I began to peel my own cultural cataracts, I quickly understood that other peoples’ cultures could be compatible with my beliefs and understandings of the world. That’s when we are able to relate to one another and form productive relationships. I’ve come to learn that teaching is all about relationships. Therefore, it is imperative to adjust our cultural lenses to begin to create a more harmonious world.” If we are to become agents of change and an authentic embodiment of cultural clarity, one must recognize their cultural cataracts.  The first step on this journey is to acknowledge your blinders, remove those blinders and build positive relationships.  The second step is to develop a habitat of reflection and be intentional about your words and actions.

My journey to become a more authentic version of myself began with my relationship with Mr. Susso.  Our unique yet similar journeys have empowered us to use our personal narratives to fight against cultural bias and inequities within education. While the process of clearing our vision of our cultural cataracts is a process, this is just one example of the significance for GOMO Educational Service’s presence with helping educational leaders become more culturally competent and responsive with working in and leading equitable school systems and organizations. If we peel back our cultural cataracts, we begin to see the best of humanity. As educators, it is crucial to empathize with our students’ situation before asking them to understand ours. We’ll create more harmonious classrooms and school systems, tolerant communities and eventually, a more unified world.  We become, as such, better individuals, better administrators, better teachers, better faculty and staff members, and, ultimately, better citizens. The process begins at the foundation, as Maya Angelou insists, “It is time for parents to teach young people early on that in diversity, there is beauty and there is strength.”