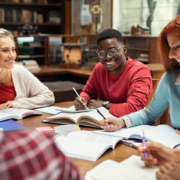 From birth to grade eight, my family and I only attended Haitian churches. So everyone spoke the same languages and looked like my family from the babies and youth to those in their very wise years. During my high school and college years in the late 1980’s and 1990’s, our family attended an American church in Montclair, New Jersey. Everyone still looked like us, but it felt like we were in North Carolina in North Jersey because there were so many people from the South. Therefore, I would overhear adults discussing some of their experience and challenges with racism from the South growing up but also in the present time.

It was not until 1991 during my freshman year at the largest Christian university in the U.S. that I was called the “N” word on the first day in the dorm. The white freshman who called me the racial epithet stated that I was the only “N” he had ever seen close up before because there weren’t any where he lived in Vermont. Of course, I asked him to refrain from identifying me with that term. Because change is difficult, I believe it occurred a couple of other times before he stopped completely. However, it took for him to get to know me as a person.

There was another male student in our dorm that I had to interact with daily. He used to look at me with a crooked eye. Although we had classes together, dorm gatherings, bible studies and more, he watched me closely for the first semester but never spoke to me. It was not until the first day after returning for second semester that we began talking. He notified me that I was also the very first Black person he had seen. Growing in West Virginia without any person of color, he heard so many negative stories of Black people. Prior to me, he only heard one time that there was a black person in a Walmart parking lot. So he and a few of his friends ran over there to see this phenomenon but the person had already left. It was a missed opportunity. Therefore, watching me over time interact with other people proved those stories incorrect. Additionally, the other Black people in his classes and places he visited also were different. We really became good friends during the second semester because he let his guard down.

During that same school year, I became friends with two white female classmates. I felt the bond getting stronger that I asked them both at separate times to potentially consider our friendship to evolve into a relationship. I was rejected by both at separate times but for the same reason. My classmates attributed their future rejection by their families and communities would be too much to bear. One even stated, “What kind of struggles would our future mixed children experience? It wouldn’t be fair to put them or me through that.”

Although sad, these situations occurred at the most prominent Christian university in the US at the time in the early 1990’s. There is a chance they probably still do. How could that happen, every student, faculty, staff and administrator is supposed to employ Christ-like principles of love so racial epithets, divisiveness, oppressive behaviors and practices should not exist. Unfortunately, they do. I will discuss more about Christians and racial tension in the world in part 2.