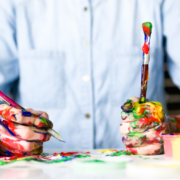 The days of looking at people’s different abilities as disabilities are over. If not, they should be. When I was in either second or third grade, I developed a stutter. In the fourth grade, I was designated for speech services while in catholic school. Another student of color in my class and I had to be pulled out during a core content area class to receive speech services. What I must mention is there were only three families of color in this private school in the 1980s: my brothers, sisters and I of Haitian descent, my father’s best friend’s children also of Haitian descent and another family from Peru.  While a stutter is something people can get rid of, the color of my skin was something I could not easily remove. As a black boy at a predominantly white catholic school with all white able-bodied staff that were also of the catholic faith, I was not perceived as destined for greatness. One day during library class, all of my classmates got reading materials of their choice like magazines, cartoons, books, etc. The white PTO parent on duty notified me that she had a book that would improve my reading skills and help me speak better. Then she thrusted a book about slavery, forced me to sign it out and said, “you’ll also get a chance to know about the history of your people!” Trust me, I have so many more stories.

As a principal in a middle school in the early 2000s, I have had students with different abilities classified and placed in special needs classrooms. Additionally, I have had other differently abled students that were not classified but required teachers to address their specific learning needs. I remember parents or caretakers of these students were merely looking for their children to lead normal lives and feel like normal people. What they and I did not realize is that these students were extraordinary! I remember one male student we will call Steve with terret syndrome was able to accurately calculate mathematic equations beyond anyone in the building when asked. Later, he notified us that he immersed himself with everything mathematics when he was home. Another autistic student we will call Michael was gifted with drawing engineering designs. No wonder he loved staying in our CAD class beyond his period all the time. It was months later that his parents told us that he was always on the computer at home inputting code to design his own robot.

I speak about this topic from direct experience because I have a few relatives and very close friends who are also differently abled with cerebral palsy to autism from birth and after birth effects. Throughout their lives, I have seen their ability to do things like pick up an instrument and perform complex classical music without any training, painting without practice and create pieces with precise details that could be sold in art shows or being a key designer with an assistive technology company to create a breakthrough device for mute individuals.

Now these previous examples seem larger than life. One example of the power of the differently abled on a person happened during my time as principal. Our school had a male student who we will call David was perceived as behaviorally challenging because he liked to oppose all forms of authority. One day when he chose to leave his classroom, he ventured into the MD room formerly known as the room with students with severe multiple disabilities. While in that room, the teacher and the paraprofessional saw that David was very helpful, calm, attentive and engaged with the students. When we heard about how supportive David was in the class, we spoke to him and his mother. We found out that David had a brother that is differently abled. His mother praised his ability to help and protect his brother. We created an individualized personal plan (IPP) for David which included daily time to spend in MD room with the adults and students. It changed him and how David responded to people and things for the rest of the school year.

The purpose of GOMO Educational Services is to highlight these strengths in all students and help adults be aware of how to empower, engage and enhance the strengths and future potential. Be aware that Michael and Steve have grown up to do some amazing things in their lives. Steve is a physicist and is working on a few invention patents. Michael runs his parents’ winery and designing a new filtration technique to blend wines faster. Don’t forget the boy who I initially mentioned who used to stutter. He is the founder and CEO of GOMO Educational Services and travels around the world training leaders of educational institutions and organizations and speaks in front of thousands of people regularly about history of structural racism, discrimination, restorative practices and cultural competency.